FOOD AND THE ARAB SPRING

Posted on October 16, 2012 by asianfoodeconomics 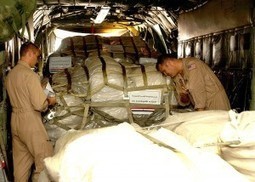 The Middle East and North Africa (MENA) has been experiencing deteriorating parameters for both food production and consumption for some time. Agricultural output is constrained by limited water resources, diminishing arable land, and poor public policy. Consumption is driven by high population growth and subsidies that encourage waste. The region is food insecure, both on the level of the individual consumer (high rates of poverty) and on a national level (reliance on imports). Rising food prices played a role in fomenting Arab Spring unrest but appear to have been quickly overtaken by other grievances. Nevertheless, MENA regimes–both the transitional governments emerging from the turmoil and incumbents seeking to retain power–responded by increasing food subsidies and adopting other economically unsustainable policies, thereby exacerbating the policies that contributed to the Arab Spring.

This entry was posted in Uncategorized. Bookmark the permalink.